Cheap sequencing has created the opportunity to perform molecular-genetic analyses on just about anything. Conceptually, doing this would be similar to working with traditional genetic model organisms. But a large difference exists: For traditional genetic model organisms, large teams and communities of expert assemblers, predictors, and curators have put years of efforts into the prerequisites for most genomic analyses, including a reference genome and a set of gene predictions. In contrast, those of us working on “emerging” model organisms often have limited or no pre-existing resources and are part of much smaller teams.

Run FastQC on the reads.pe2 file. The command is given below but you will need to replace REPLACE with the path to a directory (this could be your tmp directory) before running the command. The --nogroup option ensures that bases are not grouped together in many of the plots generated by FastQC. This makes it easier to interpret the output in many cases. The --outdir option is there to help you clearly separate input and output files. To learn more about these options run fastqc --help in the terminal.

Your resulting directory structure (~/2019-09-xx-read_cleaning), should look like this:

What does the FastQC report tell you? (the documentation clarifies what each plot means). For comparison, have a look at some plots from other sequencing libraries: e.g, [1], [2], [3].

Decide whether and how much to trim from the beginning and end of our sequences. What else might you want to do?

Below, we will perform three cleaning steps:

Other tools including fastx_toolkit, kmc2 and Trimmomatic can also be useful.

seqtk (documentation) is a fast and lightweight tool for processing FASTA and FASTQ sequences.

Based on the results from FastQC, replace REPLACE and REPLACE below to appropriately trim from the beginning (-b) and end (-e) of the sequences. Do not trim too much!! (i.e. not more than a few nucleotides). Algorithms are generally able to cope with a small amount of errors. If you trim too much of your sequence, you are also eliminating important information.

Let’s similarly inspect the paired set of reads, reads.pe1, and appropriately trim them.

Say you have sequenced your sample at 45x genome coverage. The real coverage distribution will be influenced by factors including DNA quality, library preparation type and local GC content, but you might expect most of the genome to be covered between 20 and 70x. In practice, the distribution can be very strange. One way of rapidly examining the coverage distribution before you have a reference genome is to chop your raw sequence reads into short “k-mers” of 31 nucleotides, and count how often you get each possible k-mer. An example plot of k-mer frequencies from a haploid sample sequenced at ~45x coverage is shown below: 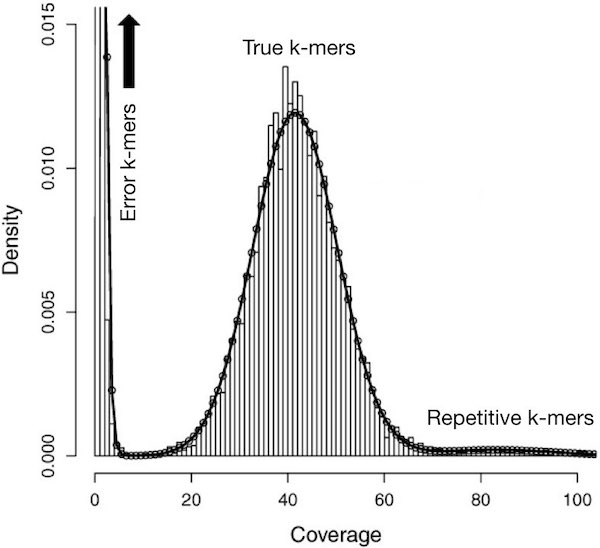 Surprisingly, many sequences are extremely rare (e.g., present only once). These are likely to be errors that appeared during library preparation or sequencing, or could be rare somatic mutations. Although not show in the above graph, other sequences may exist at 10,000x coverage. These could be pathogens or repetitive elements. Both extremely rare and extremely frequent sequences can confuse assembly software and eliminating them can reduce subsequent memory, disk space and CPU requirements considerably.

Below, we use kmc3 to trim extremely rare k-mers from the reads. Multiple alternative approaches (e.g., using khmer) exist. Trimming rare k-mers can cause some reads to become too short to be informative. We remove such reads in the subsequent step using seqtk. In the same same step, we also ask seqtk to remove reads containing low quality. Finally, because we have discarded certain reads (either because they had become too short or because they contained low quality bases) some reads may have become “orphaned”, i.e., they are no longer paired. We eliminate these in the next step because subsequent analysis (e.g., genome assembly, or variant calling) often assume all reads to be paired. Understanding the exact commands – which are a bit convoluted – is unnecessary. It is important to understand the concept of k-mer filtering and the reasoning behind each step.