You know how a Y chromosome is usually smaller than an X chromosome, and it contains fewer genes?

Surprisingly, the opposite is true: the non-recombining b is almost twice as big as the B. 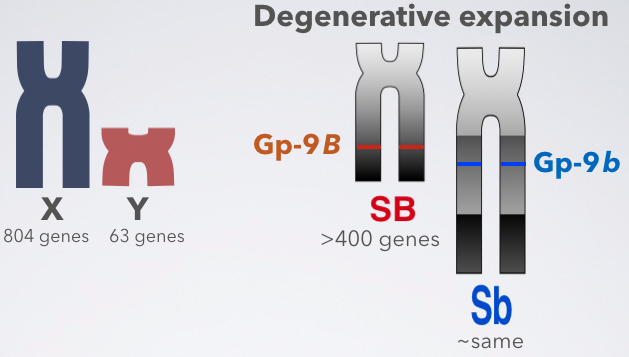 This is due to a process called “degenerative expansion”. We found the first evidence of it in an animal (there was a previous report in Papaya).

So why is the b variant of the fire ant supergene expanding?

It turns out that immediately after recombination is suppressed, massive loss of genes is too costly.

Instead, degeneration of a non-recombining region occurs in 3 steps:

Why is it rare to observe the growth of a non-recombining region?

In most sex chromosome and other supergene systems, we have only seen the end of the 3rd phase. The systems studied are typically millions to hundreds of millions years old.

However, in the fire ant social supergene system we’ve been able to observe the first phase. This is probably for four reasons: the fire ant supergene is young, we used extra-long molecule sequencing, and ant males are haploid, making it easy to detect differences between haplotypes, and also creating strong purifying selection against gene loss.