Researchers from Queen Mary University of London and Imperial College London have identified genes that could help bumblebees overcome environmental challenges such as climate change.

The study, published in the journal Molecular Biology & Evolution, looked at the genome sequences, or DNA blueprints, of bumblebees from the widespread European species Bombus terrestris to understand how this species had been adapting to recent changes in the environment. 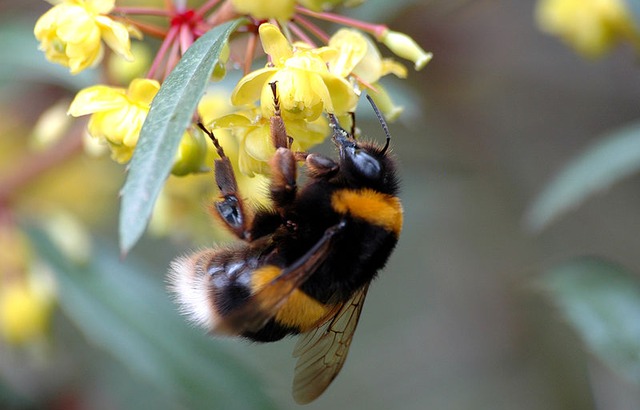 The research team then used evolutionary data science approaches to identify which parts of these DNA blueprints had been replaced by newer versions over recent decades. They found signs of recent changes to the genome in areas known to be linked to the nervous system and wing development.

The researchers suggest that the observed genetic changes likely improved the bumblebees’ abilities to forage for food in response to changes in climate and within their rural environments.

Interestingly, the researchers also uncovered some unusual features of the bumblebee genome, including a region containing 53 genes that lacked the diversity found in the rest of the genome.

Bumblebees and other insects are important natural pollinators of crops and of wildflowers. Recent studies have documented international declines of bees and other pollinators, citing habitat loss, disease, pesticides, and climate change as contributing factors. However, some of these pollinators, such as Bombus terrestris have also been doing well despite changing environmental conditions.

Lead author of this study Dr Yannick Wurm, Reader in Evolutionary Genomics and Bioinformatics at Queen Mary University of London and fellow of The Alan Turing Institute, said: “We found signatures of recent adaption in genes throughout the bumblebee genome, including for genes involved in the nervous system and in wing development.

“Simultaneously analysing many genomes of the buff-tailed bumblebee sheds new light on the health of this species. This species is doing well, and we found that most of the genome harbours extensive genetic diversity and the ability to use it. These traits will support this species in continuing to adapt to the challenges it faces.”

Dr Colgan, the first author of the study, said: “In contrast to the high genetic diversity in most of the genome, we found a gene-rich region with the opposite pattern: extremely low diversity in bumblebees and in their relatives, the honeybees. We don’t fully know the evolutionary reasons for the pattern observed in this region of the genome, nor how it may impact the ability of the species to adapt.”

The findings provide important insights into the ability of a key pollinator to adapt and highlight the benefit of genomic approaches for understanding the genetic health of wild populations. The researchers suggest that this type of approach could help develop tools for safeguarding beneficial insects important for ecosystem stability, biodiversity maintenance and crop productivity.

“The UK hosts more than 1,500 beneficial pollinator species, including many species of bees,” added Dr Wurm. “Applying the genomic approach developed here to other pollinators can help identify those species most at risk and inform the development of custom-tailored conservation and mitigation strategies.”

Dr Yannick Wurm is a Reader in Evolutionary Genomics and Bioinformatics at the School of Biological and Behavioural Sciences. His lab runs between Queen Mary University of London and The Alan Turing Institute. The lab studies the lives of social insects including ants and bees, and how they are affected by social and environmental challenges. For this, lab members combine behavioural experiments with cutting-edge molecular approaches including genomics and bioinformatics. Find out more about the Wurm Lab.